This blog is my response to this article, by Prof Soo Downe.

This paper from December 2014, titled “Is society being reshaped on a microbiological and epigenetic level by the way women give birth?” (which Soo Downe co-authored), opens with the following quote:

“Intervening in childbirth is like throwing a pebble into a pond. The ripples keep on going and you don׳t know where they will end up – but you can bet that on some distant shore there will be an effect. It is only relatively recently that we have been looking beyond the throw of the stone to the distant shore. What we see is very, very scary”

This paper goes on to describe ‘two leading theories.’

The first theory relates to the neonatal microbiome. The theory describes that during pregnancy and birth, the neonatal gut acquires flora that has been inherited ‘across generations from Neolithic times’, and that ‘…a co-dependency has built up between these organisms and the human immune system.’ The theory is that babies born by C-section miss out on a vital route of colonisation (vaginal delivery) and are therefore left ‘…vulnerable to later atopic and auto-immune disease’ as a consequence. But there is no high-quality evidence to support this theory. In fact, the latest scientific study found no ‘lasting association between caesarean delivery and a distinct microbiome community or its function in infants beyond the neonatal period’.

The second theory relates to epigenetics.  The paper states ‘…intervention in childbirth could be regarded as a potential environmental trigger with epigenetic consequences that may alter the human epigenome.’

If  there was robust scientific evidence that proved that the method by which a baby was born had a real, measurable genetic effect on babies, I would agree that women and families should be informed of the evidence so that they could take the facts into account when making decisions and choices about childbirth. However, just as in the case of microbiome literature, there is  no evidence at all that proves this theory.

This however, does not stop the authors of the paper making some pretty bold statements about what these theories mean.

“..it has been argued that, on the day of birth, a person is at a higher risk of death than for any other day until they are over 90 years old. Those who might argue for increased intervention during labour and birth in the name of safety might also pause to consider that the preservation of physiological birth as far as possible might be the passport for the lifelong health and well-being of not only an infant, but also for its future offspring. The day of birth may turn out to be one of life׳s most defining events.”

But  let’s just consider what is being proposed here. The authors are actually suggesting that the way a baby is born could be ‘…the passport for…lifelong health’ not just for the infant but for generations to come. Further, the suggestion is that people who argue for ‘increased intervention’ during labour and birth in the name of safety, might ‘pause for thought’. Really?

Firstly, the notion that anyone is arguing for ‘increased intervention’ in the name of safety is a misrepresentation. The direction of change towards safer maternity care is around improving training, risk assessment and multi-disciplinary work so that better decisions are made around when to intervene – not simply blanket ‘increasing’. Secondly though, the idea that when it comes to the safety of childbirth and preventing catastrophic, life changing consequence like death or serious harm to a child, surely no family, midwife or obstetrician should ‘pause for thought’ because of non-evidenced messages such as these?

Sadly, such messages clearly do have a real impact on women as comments in this article show.

“I was devastated when I was told I wouldn’t be able to have Diego naturally…Suddenly I felt very out of control. I was worried my baby would not get the health and emotional benefits of a natural birth…Babies born vaginally have a greater diversity of bacteria in their guts than babies born via c-section. I believe the benefits of a diverse microbiome are a better immune system, less risk of allergies, obesity and neurological diseases such as depression, anxiety and autism. I just wanted to give Diego the best start, like I did for his brothers.”

In summary, whilst no one would argue or advocate for unnecessary interventions in childbirth (or the risks associated with them), I do think that the benefits and risks are not always presented clearly and papers like this, which use language such as ‘very, very scary’ are less than helpful. After all, the Queen was born by C-section and her children, grandchildren and great grandchildren seem to be doing ok!

The blog then explains the origins of the RCM’s ‘normal birth campaign’ describing it as a campaign ‘to enhance the capacity of midwifes to support women who wanted such a birth’. It’s worth reflecting for a moment that safe maternity care involves a multi-professional team. Nearly all women will need a midwife, some of those women will need an obstetrician and other healthcare professionals but the RCM campaign seemed  only aimed at midwives. For example, the RCM produced a document titled ‘the Top Ten Tips for Normal Birth’ which included tips for midwifes such as ‘wait and see’, ‘trust your intuition’ and ‘justify intervention’. 12 years after the campaign started, rates of intervention in childbirth have increased and there is strong evidence that an approach of pushing ‘normal’ childbirth too far has contributed to avoidable harm and death. Surely the conclusion from this is that currently, we are getting decisions about interventions wrong at both ends and we need sensible policies to address both issues, in context of a proper appreciation of benefit and risk and consequences?

An independent investigation commissioned into the maternity services at Morecambe Bay found that 11 babies and one mother died avoidably. The report identified that an “over-zealous pursuit of the natural childbirth approach” was a factor in the deaths.

The blog points out that a number other failings were also identified by the report. Whilst this is of course true, let’s be crystal clear; children at Morecambe Bay would be alive today were it not for this approach.

As for claims that the situation at Morecambe Bay was unrelated to the RCM campaign, you can read what the Chair of the Morecambe Bay Investigation, Bill Kirkup has said.

“One of those elements that crops up is the misunderstanding or misapplication of national guidance on promoting normal birth. I can’t say for sure that the RCM’s previous advice contributed to this, but some of the messages, particularly about waiting and seeing and trusting intuition, had clear echoes in what we heard at Morecambe Bay.”

I think a balanced view of the evidence would at least point towards a real possibility that the RCM campaign contributed to the approach at Morecambe Bay. Therefore a responsible response would surely be to redouble efforts to ensure this couldn’t happen in the future?

Listening to other voices

In recent weeks, many women have been sharing their experiences. Natasha Pearlman bravely wrote the following in the Times last week about her experience of childbirth.

“…looking back I would have expected to have been talked through some options: to be given a room, offered an induction, even just some simple advice on how to turn the baby. The midwives did nothing. It seemed as if they had made the decision, without consulting me, to push me to the absolute limit to deliver the baby naturally.”

A solicitor from the legal firm Leigh Day wrote about her experiences of talking to families affected by avoidable maternity deaths.

“I am sorry to say I have met too many parents who did feel that their midwife’s ideology of achieving a ‘natural birth’ without any medical intervention, rather than their wishes or their and their babies’ safety, dictated the way their labour and delivery was managed.”

“… in a significant number of cases parents have reported to us that their midwife made them feel, or in some cases explicitly said, that a transfer to a medical ward or the need to consult a doctor would be a ‘failure’ and so avoided both until it was too late. There was a definite impact of the push for a ‘natural’ birth on patient safety in those cases.”

Responding to the claim that the issues at Morecambe Bay were a ‘one off’, the blogs states “…the cases I have seen did not occur at Morcamebe Bay and to me that suggests that this ideology has been pursued past the point of safety, not just by the odd midwife, but by at least a number of midwives across the country.”

When I read this blog, I wasn’t surprised at all because the experiences described  echoed the many conversation I’ve had with women and families who have lost children due to failures in maternity care over the years.

The blog argues that there is no evidence ‘of a rise in neonatal brain injuries in the UK’. In fact the number of claims relating to brain damaged babies increased by 23% last year. Of course, no one is suggesting that one single issue is responsible for this, but  other countries such as Sweden have achieved remarkable improvements in maternity outcomes, whilst UK has lagged behind.

Recent work by the RCOG found that in 2015, around 800 babies either died or were severely disabled where better care could have resulted in a different outcome.

The blog argues that ‘…the absence of the campaign since 2014 does not seem to have had any effect on mortality.’ This is flawed logic for several reasons. The most obvious being that the campaign for normal birth did not stop in 2014. The normal birth campaign website remained active until May this year and other documents, including the ‘top tips for normal’ birth were simply transferred to a new website. In any case, the influence of a campaign such as this is through the messages permeating midwifery training, education, conferences and events.

There are now hopeful signs that these messages will change and a new approach with an emphasis on collaborative, safe and personalised care will spread.

The blog is  critical of maternity services at the Morecambe Bay Trust. This is a Trust where it’s maternity services have gone from being described as ‘dysfunctional’ to now being seen as an exemplar for others to learn from. The team at Morecambe Bay have done remarkable work to turn services around and rebuild the trust of the local community. The last event considered by the Morecambe Bay investigation was in July 2013 yet the blog is critical of the Trust having relatively high intervention rates in 2014-2015, suggesting that this something the media should be reporting.

As the father of a baby that died at Morecambe Bay, I have to say that I find these criticisms quite hard to comprehend. I think it’s unwise to draw conclusions about interventions rates at any specific unit without looking much more carefully at local information. But the big picture here is that a unit where mothers and babies were needlessly dying is now much safer. Is the blog suggesting that a possible increase in intervention rates at Morecambe Bay is too higher price to pay?

Fortunately, there does now seem to be a consensus on the direction of change needed to make maternity services safer. There is universal agreement that the recommendations made by the each baby counts report are right and that collaboration and teamwork is the key to safer maternity care.

There is some really good work happening right now; Southmead, East Kent, Morecambe Bay are just some examples. As the tweet below states, let’s continue to work together for safe births, regardless of the mode of delivery. 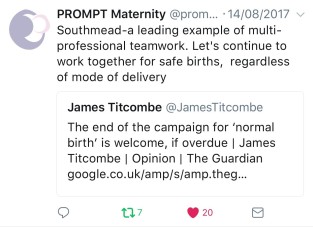